Whilst emptying the costume case at Stockport Museum (mentioned in an early post HERE) I came across a couple of objects that I didn’t recognise straight away but I would in their modern-day form without hesitation.

These objects have since returned to the curatorial services and are now located in the stores while the redevelopment goes ahead. Within the case they were located in the
1900’s kitchen and could possibly be identified to the modern museum visitor as ‘Victorian curiosities’ as in appearance they look very interesting and compelling yet their use could only be described as the most mundane of tasks. 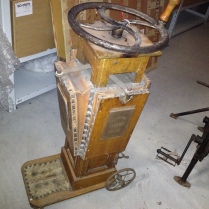 This object comes for the 1890’s and is a vacuum cleaner. Whereas earlier vacuums were more elongated and pole like in shape, this model is beginning to take on a shape that we would recognise. The vacuum is made from wood with metal wheels to allow for movement. There is a larger wheel located on top of the vacuum cleaner with a wooden handle to turn it. As the wheel turns it causes the bellow-like pumps on the body to open and close, taking in air and causing a suction function that gives the object its name; the Volvac Continuous Suction No.1.

This particular one is missing a hose and so is not a completely perfect example. However, I am finding it extremely hard to research any information into regards to this object so despite it being incomplete, it is a good piece to have if they are limited in numbers.

This vacuum cleaner was bought for the collection in 1968 from a local shop in Adswood, Stockport. 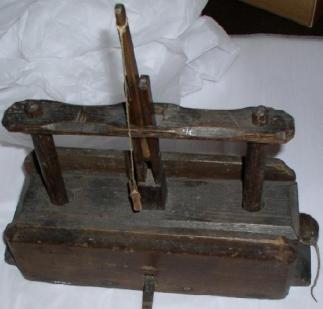 The second object is a large and bulky, wooden piece and is from the floor of the kitchen.

It is a mouse trap.

Made from Oak and Fruitwood the trap works essentially just as a modern-day one would. Dated from the mid to late 18th century, these traps were still in use well into the 19th century. The Victoria and Albert Museum holds one very similar to ours and they state, in reference to how it works:

“The top block was raised and food put in, to tempt the mouse into the trap. When the mouse went in and pressed down a balance in the centre of the bottom board, the heavy block fell down and killed it.”

….. and that few of these traps survive today as they were often worn out or thrown away.

Our mouse trap was gifted to the collection in 1955 by a local resident of Great Moor, Stockport.

Here is a video of just how the trap was used:

This entry was posted in Find it Friday!, Stockport Story Museum. Bookmark the permalink.