Posted on November 1, 2013 by lfstockmus

It was Halloween yesterday! Happy Halloween!!

Halloween can be a great time for museums as if in the right context, the right lighting or with the right objects they can be very eerie places!

My greatest fear in life began in a museum; I was 7 years old and we were about to make our first museum trip with school. We had been learning about the Ancient Egyptians and we were going to see the Mummies at Manchester Museum. Before this though my teacher introduced us to ‘The Curse of the Mummy’s Tomb’, the Goosebumps book written by R.L.Stine. This book didn’t give me goosebumps, it gave me night terrors for weeks and when we arrived at the museum and I saw the real thing, I screamed and cried for days after, and so began my fear of Mummies!

So, in the spirit of Halloween, today’s Find it Friday is Egyptian in origin, however, it is not a Mummy. I couldn’t bring myself to get one out today but we do have a few hands (and animals, see HERE) in our collection here at the Curatorial Services that I will save for another day. Today’s object is much more related to what would have surrounded a Mummy; it’s part of a tomb! 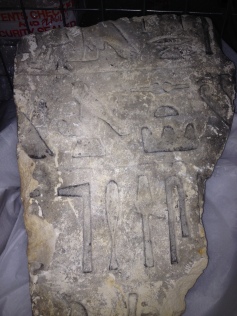 This stone is a triangular-shaped fragment of limestone baring 4 lines of hieroglyphic text. Hacked from the wall of a tomb or perhaps a temple, the original provenance is unknown. However, it was carved in Egypt, obviously, and is dated circa 3100 BC to circa 394 AD.

Before I go on I must state I am not an Egyptologist. There is a brief translation on the Modes record for this object to which I will compare my own findings but of course these findings will merely be in the form of ‘I think this…’ as hieroglyphics are a complicated code to crack.

The language of the Ancient Egyptians is one of the oldest on Earth. Spoken from around 4000BC, nearly 6,000 years ago, and not always consistently spoke or written in the same way. Hieroglyphic script contains no punctuation or even gaps between the words (glyphs) which makes it difficult to read, and can even be written from left to right, right to left or top to bottom!

There are various types of glyphs; ideograms or logograms are glyphs that represent an object or an action. So a duck would represent a duck. Whereas legs, they would represent the action of running. Then there are phonograms, they are sound glyphs; sounds that when spoken together make words. This is where it gets complicated as what the glyph looks like and what it means are two completely different things. There are over 6,000 of these but 24 are used so often that they have become known as the Ancient Egyptian Alphabet; these are what I have used to initially identify some glyphs on our tomb stone.

As it is such a small piece of the puzzle its unlikely that the translation will make any sense. I have divided the stone in to 4 rows and highlighted each individual glyph with a coloured box around it.

Row 1: Unfortunately this row is broken pretty much down the middle and the top part of most of the glyphs are gone. The only intact ones on this row are in the pink box. There is actually two in here. The top one is a shape depicting a mouth and this sits over a loaf of bread symbol. The mouth is pronounced with the sound of ‘r’ where as the bread is ‘t’. These make no sense as a pair but they are obviously surrounded by others that can’t be read as a whole.

From looking at the bottoms that are still present I am going to make an educated guess using a reference book to what these symbols are and at the bottom of this blog I will post pictures of what I think they look like and you can make your own assumptions.

So, the first I believe to be the lower half of a quail chick, this translates as ‘u’ or ‘w’, the next glyph is also a bird but I think due to its larger size and its feathered shape, it’s a vulture which sounds as ‘ah’.

If we bring all the sounds in this row together; W, AH, T, R…. could that not sound out like ‘water’?

Row 2: In the blue box is a falcon image apparently sat on a curved shape on top of a box. After a bit of digging I believe this to be a likeness to the hieroglyph representing Nemty. Nemty was an ancient falcon god whose name is interpreted as ‘wanderer’, he was the ferryman of the Gods. His appearance here is very much like the king of the Gods, Horus.

In the yellow box could be a door bolt which translates to the sound ‘s’ OR ‘z’ and below that in the purple box another loaf of bread, ‘t’. In the red box is a glyph I can’t seem to identify. The closest I can get is the ‘n’ water ripple hieroglyph, but that would only be if it was altered quite extensively. However, it would make sense in addition to the green box of row two.

The green box shows a slight fragment of what I believe to be the glyph for the Pshent, the double crown. This makes sense because the red crown which is half of the crown, in addition to the water ripple, means the River Nile, and we have already established that the earlier glyph represented Nemty, who was a ferry man.

Row 3: In the red box is the symbol of divinity, which is the beginning of talk relating to a god, a goddesses or divine. The second is a fullers club which sounds as ‘hm’. Now, on the Modes record these two are stated as a pair translating to mean ‘prophet’ or ‘priest’. Unfortunately, I am unaware of what the next glyph is to add to this further, and the fourth is a folded cloth symbol that translates to a ‘s’ sound.

Row 4: The first here is very obvious, this glyph is a reed leaf which translates to the suffix pronouns “me”, “my” and/or “I”. Again, this is where the tomb stone is broken and so the next symbol is split in two and can not be read. However, the way the visible bit is shaped I am going to go out on a limb (!!) and say it is a raised arm and is the ideogram/logogram showing a man dancing… Me dancing? I Dance?

Of course, this is all conjecture. Its is possible that none of this is anywhere near correct as I have explored the hieroglyphs in their most simplistic forms. Not only this but I’m starting to suspect this reference book I bought on a cruise ship down the Nile was intended for children and is not 100% authentic.

Still, its interesting to ponder.

Here are some images of what is visible and what I think they might be part of….
(Click for larger view.)

And some more of the Tomb stone itself: 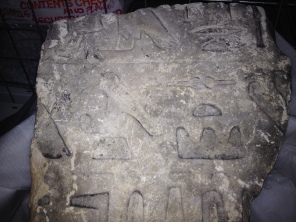